INSPIRATION is everywhere all you have to do is IMAGINE

Red fort is one the oldest fort in New Delhi. It was build when Mughal Emperor Shah Jahan shifted his capital from Agra to Delhi.

It was designed by Ustad Hamid and Ustad Ahmad, the renowned architects of the period of the Mughal Emperor Shah Jahan. Oddly, Red Fort got its name because it’s been made by Red Sandstone but originally it was white in color but it was painted in Red by the British and its real name was Blessed Fort.

There is another interesting thing about Red fort is that it housed the beautiful Kohinoor diamond, which was embedded into the royal throne of Shah Jahan, which was located in the Diwan-i-khas. The Diamond is now a part of Royal Crown Collection of England.

Recently, I visited the Red Fort for the first time and the experience was Startling. For me, Road to Red fort is packed with tremendous History of Delhi. I reached there by walking through the well-known streets and alley of chandani chowk. When I enter in the fort, I saw the Famous Meena Bazaar, which was originally started in the times of Mughal Emperor. At that era, Bazaar was a shopping place for Royal family and Royal Officials. But Now Meena Bazaar is prominent for Its Handicraft Products from Jewelry to Home decorations and many more. 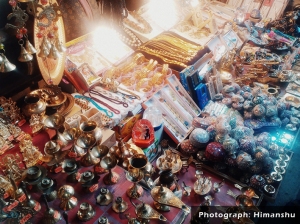 After walking through the Meena Bazaar, I reached Diwan-i-aam (Court for Common People), where Mughal Emperor listened all Common appeal and problem from their audience. Then next thing was Rang Mahal (Palace of Colors) which was home to the wives and mistresses of the Emperor and only Emperor was allowed to visit there to spend some quality time with his wives and mistresses. In a way back to the exit, I saw military barracks and buildings which were constructed by British Government way back in 19th Century AD when there was British rule in India.

At the end of the Mughal Era, Red Fort was taken over by the British, who sold its valuables and destroyed the structure within in the building. But the Red Fort is still stands today; it has been named as a UNESCO World Heritage Site in 2007, due to its historical and cultural significance. Red fort is a custodian of Cultural history from Mughals Era to British Raj to the Modern Times.

4 thoughts on “Road to Red Fort”